Christian Today have chosen four of the prayer experiment ideas as their favourites. 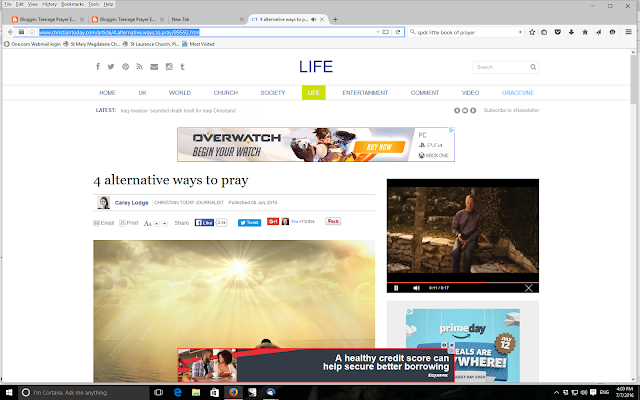 Have you tried those? Which are your favourites so far?
Posted by Miranda at 08:02 No comments: 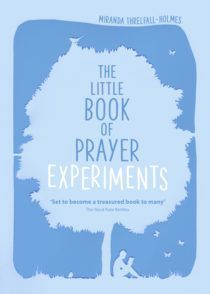 The 12 Days of Christmas

Musing on the idea of Christmas season - the 12 days between Christmas and Epiphany. 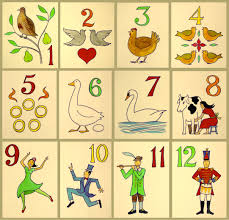 Is 'and a partridge in a pear tree...' the only thing that comes to mind when you hear the phrase The Twelve Days of Christmas?

It's a truism now that Advent has largely replaced the 12 days of Christmas as 'Christmas Season' in the popular imagination. Chocolate Advent calendars, celebrating treats for 24 days rather than the fasting and anticipation of 'old money' Advent, are the prime example. But even some churchgoers will telly you happily that they have taken their decorations down the day after boxing day!

I've written elsewhere that I don't think there's much mileage in the church attempting to resist the Christmassification of Advent. And in many ways, it's good: it certainly helps build the excitement around one of our major festivals.

But I would quite like to keep the Twelve Days of Christmas special too.

It's too late for this year, but next year I intend to make a Twelve Days of Christmas Calendar. Our permanent 'Advent Calendar' at home is a string of stocking bunting, each stocking numbered and ready to receive a sweet (or three, in my case, one for each child per day). I am thinking of making something similar for the Twelve Days of Christmas: maybe star bunting?

I found these images in a quick search of pinterest and google images - the paper one would be dead easy and you could make them into pockets by stapling two stars together at the bottom and sides. The fabric one has a free pattern here, and I'm sure it could easily be adapted to include a pocket.

What I'd really like is for someone to make an Advent calendar that DIDN'T have chocolates for the first 24 days, but then carried on for the 12 days of Christmas and DID have chocolates in those windows! Or (perhaps more commercially) had small chocs for Advent and big ones for the 12 Days. But my own stocking and star bunting combo could do the trick just as well!

Making the star bunting could be a great Advent activity for a youth group, don't you think? 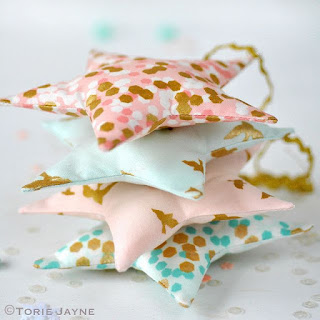 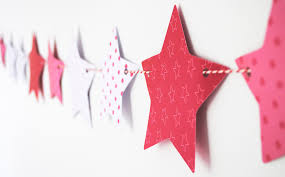 Great fun was had at Youth Group tonight as we prayed around and using a chocolate fountain! 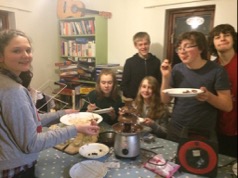 We got the choc melted and the fountain going, and gave everyone some skewers. There was a selection of fruit, marshmallows etc to make kebabs to dip in the fountain.

We took in turns to make a dip a kebab in the fountain, each time saying a prayer as we did so, going round the circle. The prayers roughly followed the ACTS (adoration, confession, thanksgiving, supplication) format, though we varied it slightly.

For the first time round, everyone had to say a prayer of Thanksgiving as they dipped their fruit selection into the chocolate. This was a good opener and icebreaker - it was easy at the very least to thank God for chocolate!

Second time round, everyone prayed Asking God for something - prayers of supplication. Again fairly straightforward.

Third time round, we tried Adoration - everyone in turn saying 'I adore you God because...'. Most people found this much more difficult, so it was really good to have the incentive that you had to have a prayer to have your go in the choc fountain!

Finally, we did a Confession round - this time silently, not sharing the prayer with the group.

We ended up having a really good discussion about prayer, especially why God needs us or wants us to confess things, about faith and politics, and all sorts of things as we sat around the table finishing the chocolate.


We've been to Greenbelt! Noah and I were very chuffed to be asked to do three sessions: a talk about writing the book collaboratively in the Literature strand of the festival, and two Experiment sessions in the Youth venue.

We were joined in the Youth venue by our friend Anne Bennett, who has tried many of these ideas out with the young offenders she works with. She also brought new ideas that she had developed.

We had a great time, especially in the sessions in the youth venue, the Den! We tried four of the experiments over the weekend.


First, we tried Bible colouring. We printed out several individual sheets from http://flamecreativekids.blogspot.co.uk/
(these are free to use).

We also had a design from http://www.lindisfarne-scriptorium.co.uk/ (which we bought a copyright licence for from the website) printed onto an A0 banner which everyone joined together in colouring in with sharpies. This led to an hour of almost freakish near-silence in the Den! And it was beautiful. 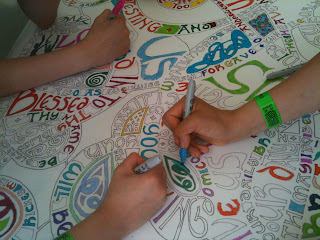 Second, we used an idea that Anne had developed using air-drying clay. Originally, this idea came about at Christmas: she had set up a nativity scene in the YOI chapel, and invited the lads to make a simple clay figure representing themselves, and add it to the scene. For Greenbelt, to be on-theme, she created a 'Bright Field', with Jesus teaching the Sermon on the Mount, and we invited all the young people to make a figure of themselves and add it to the crowd listening. There was a large poster with the bullet points of the Sermon on the Mount, and you were invited to imagine hearing it for the first time as you placed your figure.

Third, we had labyrinths - a wooden one, a felt one, and paper photocopies to colour in or follow round with a pen. And finally, prayer beads - we were literally wrestling these away from the young people when we ran out of time at the end of the allotted slot!

Highlights were a girl telling me she was going into lower sixth and would thus be leading her school Christian Union, and would it be all right if she used the book (of course!!), watching boys and girls of all ages from about 10 to about 17 concentrating in almost total silence on colouring in their bible passages, the glee with which people made their clay figures and the awe with which they placed them, and a boy of about 15 explaining to me the changes he had made to the bead bracelet design and why, so that the beads represented the things he most wanted to pray about.

Oh, and the book sold out in G-Books! 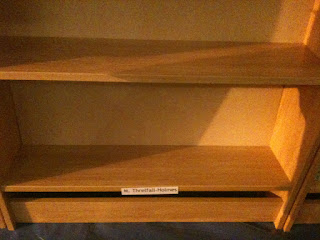 We were asked by the staff in the Youth venue if we would go back next year. I very much hope so!

Views from the Pews

Reviews and reflections on the Teenage Prayer Experiment are beginning to come in, so I thought it might be helpful to note them here. 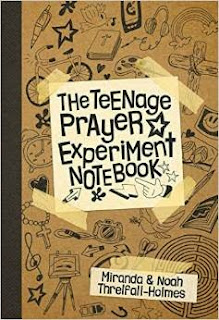 
And there is a full page review on page 3 of the Edinburgh Diocese Children's and Youth work newsletter this month: find the pdf here and turn the page!

We've made a youtube video about the Teenage Prayer Experiment! With thanks to members of St Mary Magdalene Church youth club, and Belmont Scouts, for their comments. Filming by the youth group and I, video editing by Keith Blundy of Aegis Associates.